Every time Suzanne Evans looks at the largely barren sand dune behind the Hermosa Valley School and wonders if it will ever bloom again like it did as a child, she is reminded of what naturalists say about the flora sand dunes:

“It sleeps, it crawls, then it jumps.”

Since 2014, Evans and a group of helpers, including eighth graders from Valley School, have been clearing the dune to the west of the school of invasive species and seeding it with Beach Evening Primrose, Deerwood, Lupine, Toyon, Lemonade Berry, Coastal Sagebrush, Coyote Bush and other native flora.

Evans gathers seeds from the increasingly rare vacant lots of Hemosa. She found evening primrose and pink sand-verbena on two sandy lots in the 1100 block of Palm Drive. Both lots have since been built. She found several of the same seeds in the front yard of a house in the 1400 block of Hermosa Avenue, but that yard has since been uprooted and covered with wood chips. Residents of the 1400 block of Monterey have given him permission to walk through their gates and harvest seeds from the back of their property, which faces Bayview Dr. But it, too, will soon be built.

Due to the increasing scarcity of vacant land, Evans now purchases most of his seeds and seedlings from the Palos Verdes Peninsula Land Conservancy nursery. The Conservancy has 1,600 acres of natural habitat in the Lunada Bay/Portuguese Bend area of ​​the peninsula.

And on a hopeful note, this year, for the first time, Evans and his eighth graders were able to collect seeds from plants growing on the school’s sand dune.

Evans traces her fascination with the Valley School Dune to her childhood in the Valley in the 1950s. She and her parents, Betty and Gordon, and younger siblings, Bobby and Jeanne, lived next door from school. The ocean-loving family walked to the beach on a trail above the dune.

Betty was a member of the Hermosa Garden Club and taught her children the names of the plants that bloomed on the dune and the names of the birds that fed on their seeds. Evans recalls common sightings of great horned owls, bush tits, Cooper’s hawks, red-tailed hawks, white-crowned sparrows, Allen’s and Anna’s hummingbirds, and rumped warblers yellow.

Over the following decades, as more houses were built on the dune, the amount of flora and the number of birds declined. Residents have planted South African ice plants on the remaining vacant lots to keep the sand from blowing into their homes.

In February 1987, Betty, who was the Civic Beautification Chair of the Hermosa Garden Club,

sent a letter to Hermosa Beach Schools Superintendent Marilyn Corey. “I noticed that in some places on the hill [the dune behind the school], the ice plant crushes some of the lupine and buttercup that are currently there. I think it would be a good idea to carefully remove some of the ice factory… This would give the current natives some respite. It is important to have a few patches of sand here and there for doves and insects.

She added: “I will be in touch with Mr Rogers [a local butterfly expert] at the idea of ​​planting buckwheat from the cliffs which would attract the blue butterfly…” 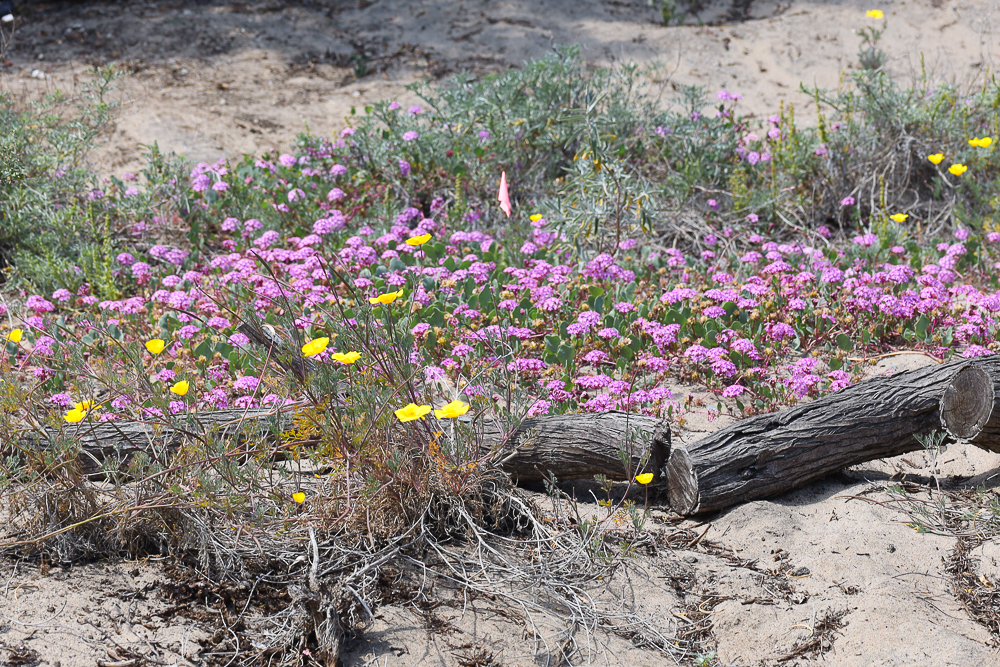 Poppy of the maritime dunes. Photo by Beverly Baird

Years passed and the ice factory continued to crush the native flora. Betty Evans died in 2005 and Suzanne moved to Zurich, Switzerland where she married, raised her family and continued her career as a painter.

But each time she visited Hermosa to see her father and siblings, she remembered how beautiful the dune behind the school was when it was in bloom.

“My dad and I regularly hiked the trail up the dune to walk along the beach. The invasive ice plant was everywhere. Pink Sand-verbena, Beach Evening Primrose, Dune Lupine, and Silver Beach Burr were all gone. Only a few coastal poppies and California sunflowers survived after being strangled by the ice plant.

Shortly after his father passed away in 2010, Evans came across newspaper articles about native plant restoration projects along The Strand in Manhattan Beach and the Esplanade in Redondo Beach. The articles inspired her to think about restoring her childhood sand dune. 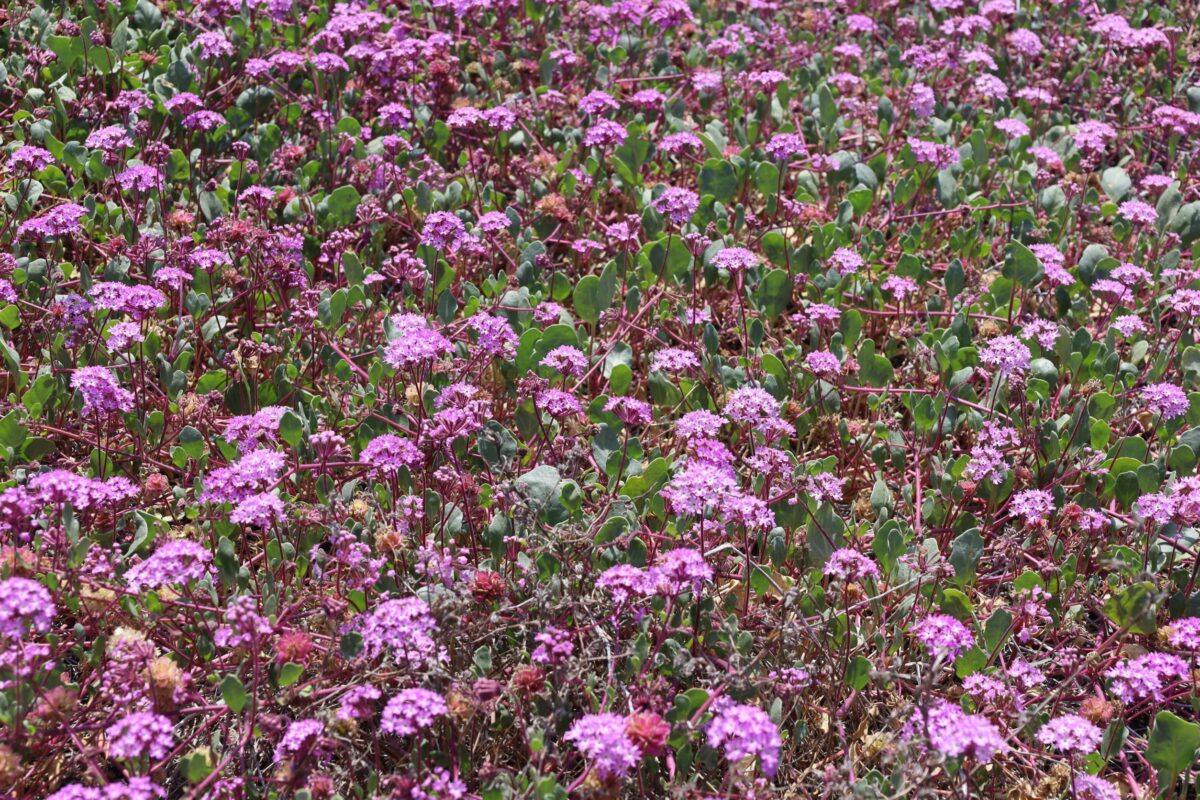 During a 2012 home visit, she mentioned her idea to restore the Valley School Dune to local photographer Chris Miller, who referred her to local community activist Dency Nelson. Nelson introduced her to school board member Ray Waters, who introduced her to new superintendent Pat Escalante. The school district had considered cutting out the dune for a gymnasium, but neighbors blocked the plan.

In 2014, the school board approved the Hermosa Valley School Back Sand Dune Native Plant Restoration Project, with the understanding that the program must find funding elsewhere.

“People told me I needed a landscape architect, which I couldn’t afford. But then Carol Tanner, a friend from my mother’s gardening club, suggested that I sketch out the project. Andrea Pulccini, another garden club member, turned my draft into a render,” Evans said.

“Next, Miyo Prassas introduced me to Tony Baker, a native plant expert who had helped Miyo reintroduce native flora to the sand dune behind her valley home.”

“You don’t want a landscaped garden. You want a natural garden,” he told her. Baker gave him a list of seeds to collect and told him to scatter them across the dune, as the wind would.

In the years that followed, Evans devoted visits to Hermosa to uprooting the ice plant and Australian acacias, which carpeted the dune and prevented the growth of native flora.

In his absence, she handed over the supervision of the project to another Hermosa Valley resident, Jackie Tagliaferro, who had been a close friend of her father.

One condition she insisted on in her agreement with the school board was that the students be involved in the catering. 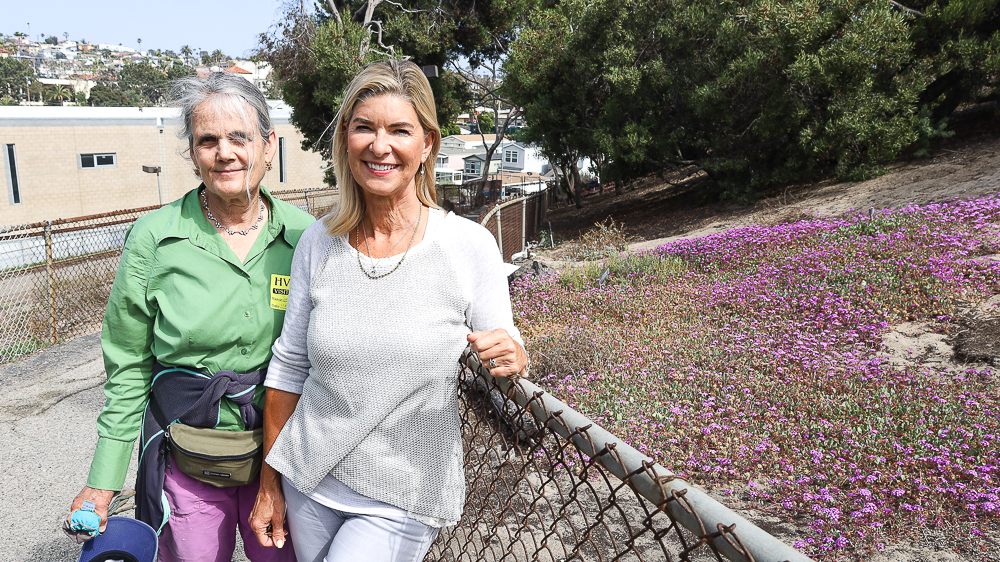 In 2013, when the project was still in its infancy, Hermosa Valley eighth-grade history teacher Tammy Heath encouraged her students to help clean up and seed the dune.

“The students learned how the Indians used the stems of Mule Fat for arrows, and why the plant was called Mule Fat (mules like to eat it). We rolled a tennis ball through the Beach Burr to show how its barbed seeds are picked up and spread by passing animals and people.

“The kids were more interested than you think, because they’re not farm kids. Many had never picked up a rake or a shovel,” Heath said.

During the 2016-2017 school year, science teacher Vince Aza incorporated the restoration project into his indoor-outdoor ecology class. Evans hopes the “outdoor lab” will become part of the school’s curriculum.

Evans also hopes the restoration project will be extended to nearby dune areas.

Around the time Evans embarked on restoring the school’s dune, Janice Yates, a board member of Marineland Mobile Home Park (the mobile home park is the school’s southern neighbor ), obtained a grant from the Southern California Native Plant Society to restore native flora in the park. sand dune area. When Yates died in 2019, park resident Betty Starr continued the restoration effort until, according to Evans, park management withdrew support for the effort.

As protection for the dunes in their original state in the future, Evans spoke to Hermosa Beach Environmental Programs Manager Doug Klauss about the city’s designation of the Valley School Dune as a historic landmark. .

Krauss said in an interview Tuesday that he was impressed with the restoration effort and expects its protection to be addressed in the park’s master plan, which the city is currently undertaking. 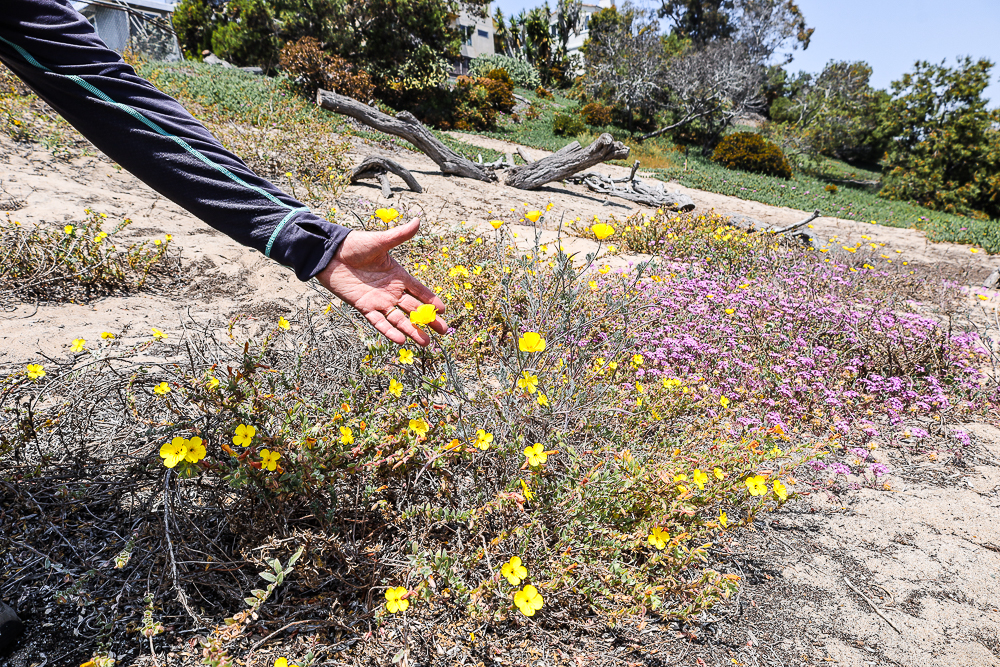 Suzanne Evans cradles a buckwheat flower from the cliffs, without which the blue butterfly El Segundo would perish. Photo by Kevin Cody

To illustrate the importance of preserving native flora, Evans cradled a small white flower of cliff buckwheat, newly sprouted on the dune. The blue butterflies of El Segundo lay their eggs on these flowers, where their pupae feed before flying away. The El Segundo Blue was in danger of disappearing, until the Chevron El Segundo refinery reintroduced buckwheat from the cliffs into the dune below the flight path of Los Angeles International Airport.

Now, with additional habitat restoration along the dune, which extends from the foot of Palos Verdes to the airport, the El Segundo Blues have their own flight path. Emergency room